Federal health officials have concluded their investigation involving General Mills flour implicated in an E. coli outbreak that sickened at least 63 between December 2015 and now, but they say more people are expected to become ill. Both the Food and Drug Administration and the Centers for Disease Control and Prevention again urged consumers nationwide to check their homes for the recalled flour and a variety of recalled foods made with it in final outbreak reports posted Thursday. “Although the outbreak investigation is over, illnesses are expected to continue for some time,” according to the CDC report. “Consumers who don’t know about the recalls could continue to eat the products and get sick. A list of the recalled products and how to identify them is available on the Advice to Consumers page.” The 63 confirmed outbreak victims are from 24 states and range in age from 1 to 95 years old. None have died, but 17 had symptoms so severe they required hospitalization. One person developed a potentially fatal complication, hemolytic uremic syndrome, a type of kidney failure. Onset of the victims’ illnesses ranged from Dec. 21, 2015, through Sept. 5, as of Thursday’s report from the CDC. With the announcement that the agency has concluded its investigation, CDC officials reminded the public of the potential dangers associated with raw flour. A majority of the outbreak victims reported handling raw flour or dough and/or eating raw dough or batter before becoming infected. “This outbreak is a reminder that is it not safe to taste or eat raw dough or batter, whether made from recalled flour or any other flour. Flour or other ingredients used to make raw dough or batter can be contaminated with STEC and other germs that can make people sick,” the CDC report states. A spokesman for General Mills said the company had used the outbreak and recall as a teaching tool. “By working closely with the CDC and the FDA, we have been very successful in helping educate the public about the potential dangers of eating raw dough or batter made with uncooked flour,” the General Mills spokesman said. Advice for consumers Tips from the CDC to help consumers and foodservice operators avoid pathogen problems from raw flour include: Anyone who becomes ill after handling or eating any of the products recalled in connection with this outbreak is urged to seek medical attention. They should tell their health care providers about their possible exposure to E. coli O121 and E. coli O26 to help ensure proper testing and treatment. Symptoms of infection usually begin between two and eight days after eating or drinking something contaminated with the bacteria. Most people develop diarrhea, which is often bloody, and abdominal cramps, recovering within a week. “Some illnesses last longer and can be more severe, resulting in a type of kidney failure called hemolytic uremic syndrome (HUS),” according to the FDA report posted Thursday. “HUS can occur in people of any age, but is most common in young children under 5 years, older adults, and people with weakened immune systems.” Anyone with symptoms including fever, abdominal pain, pale skin tone, fatigue and irritability, small and unexplained bruises, bleeding from the nose and mouth, or decreased urination is at risk of HUS and should seek emergency medical care. The recalls General Mills issued its first flour recall related to the outbreak on May 31. After tests showed the outbreak strain in bags of flour collected from outbreak victims’ homes in three states the company expanded the recall twice, eventually recalling 45 tons of flour. 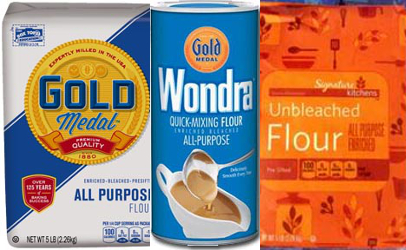 These are three of several varieties and brands of flour recalled by General Mills in relation to a multi-state outbreak of E. coli.

Company officials have repeatedly said the 45 tons is a small fraction of their annual production, but have declined to provide specific numbers on volumes produces and sold. In addition to the recalled General Mills flour — Gold Medal, Signature Kitchens and Wondra brands — a variety of packaged and fresh foods were recalled because they were made with the implicated flour. They ranged from brownie mixes to meat and poultry products. A list of the recalled products is available on the CDC website. Although federal law currently in effect requires food companies to be able to trace their products to at least one entity before and one entity past them in the supply chain, neither General Mills nor federal officials have published that information. Clauses providing corporate secrets protection prohibits FDA from releasing the information, which companies and consumers could sometimes use to identify recalled food. “General Mills also sells bulk flour to customers who use it to make other products. General Mills has contacted these customers directly to inform them of the recall. FDA is working with General Mills to ensure that its customers have been notified, to evaluate the effectiveness of the recall and  monitor the firm’s corrective actions,” according to the report posted Thursday by the FDA. “In general, supplier-customer relationships are confidential and, because of legal restrictions on disclosure of commercial confidential information, FDA is generally not authorized to release the names of these customers or the products they make with the flour.” The investigation Relatively new laboratory techniques such as whole genome sequencing (WGS) proved to be key in the detection of the E. coli outbreak. The technology also provided a trail of genetic breadcrumbs for investigators. Victim interviews gave the CDC and state epidemiologists even more evidence connecting the flour to sick people. The General Mills plant in Kansas City, MO, is just northeast of the heart of the city’s downtown area. (Photo by Coral Beach)

Everything the CDC and FDA had pointed to flour produced by the General Mills plant in Kansas City, MO, in November 2015. But the outbreak strains were not showing up on equipment or in samples from recalled lots. Less than a month after the initial recall on May 31 investigators found the proverbial smoking gun in at least three consumers homes in the form of the recalled General Mills flour. “In June 2016, laboratory testing by FDA isolated (E. coli) O121 in open samples of General Mills flour collected from the homes of ill people in Arizona, Colorado, and Oklahoma,” according to the reports posted Thursday. “… In July 2016, laboratory testing by General Mills and FDA isolated (E. coli) O26 from a sample of General Mills flour.” For additional details: Please see “More sick; General Mills recalls 15 million more pounds of flour” (To sign up for a free subscription to Food Safety News, click here.)